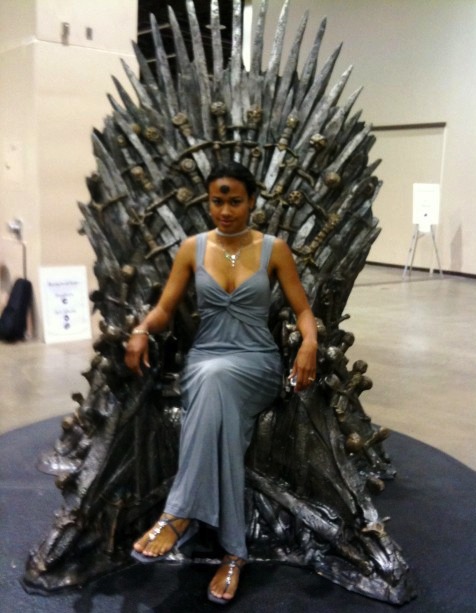 This August I attended my very first Worldcon in Reno, Nevada. I drove up from LA with storypilot which somehow turned into a 12 hour excursion instead of the expected 8 (albeit we did stop at an outlet mall but not for that long). By the time we made it to Reno we drove straight to the convention center.  We were sad to miss the band Tricky Pixie but we arrived just in time for the play, Godson, based on a short story by Roger Zelazny. This was where we got our feet wet, our first taste of things to come and what an interesting flavor it was.

We stayed in a cheap hotel the first couple nights, one that was undergoing renovation. How relevant as this worldcon was titled Renovation, so I guess I can appreciate it for that and the hot complimentary breakfasts ;). For the last couple nights we upgraded to the decadent Peppermill hotel and casino. This Worldcon was our first real Con ever. Sure, I’ve been to Anime Expo at the LA convention center before but only for 1 day and I was mostly just a wandering character (Yoruichi from Bleach). This was a 5 day event jam packed with panels from at least 10-5 during the day and parties every night. Since this was our first Worldcon we dove into all that we could. Here were some of the highlights: As you can see it was a steam punk fantasy theme. We had fun dressing up for this and partaking in the Regency dances. One of the great things about Worldcon is that you have access to all of your favorite fantasy and scifi writers. If they’re not busy you can go up and talk to them, ask a question, snag a picture. Everyone I met was so nice and down to earth. It’s so much fun getting to see an author’s personality after you’ve read their books.

Another highlight of Worldcon was the literary beers and kaffeeklatsches – you could sign up to join an author, publisher, editor, agent or artist for a beer or coffee with an intimate group of people for an hour. We had the privilege of sitting down with this year’s John C. Campbell award winner, Lev Grossman, author of The Magicians. The Magicians is a wonderful book that has a type of humor you don’t often see in fantasy books with a splash of stark reality. Lev showed up late but was gracious enough to stay longer to make it up to us even though it left him with hardly enough time to make it to George RR Martin’s wedding ceremony. Which brings me to another point. There are some intelligent, interesting individuals at these conventions. Before Lev arrived it was fun just sitting and chatting with other fans of the genre.

Panel highlights for me – I loved going to the Meet the Campbell Award Nominees panel which was moderated by last year’s Campbell award winner and this years Hugo nominated author, Seanan McGuire (aka Mira Grant, author of Feed). Let me just say that Seanan McGuire is awesome. She’s smart and entertaining, the kind of girl who takes on a challenge and does it with all the gusto in the world. I had seen her and Campbell nominee Lauren Beukes go head to head the night before on stage for the game Just A Minute which was so much fun to watch. Seanan rocked it. At one point after being called out by Lauren, she called her mom on stage and had her verify that she indeed was telling the truth about making her siblings dress up in costumes for some tv show. Anyway, back to the actual panel. The Campbell nominees were just a great bunch. Period.

I’m a big fan of Brandon Sanderson (Mistborn Trilogy, Way of Kings, etc.) so I attended a lot of the panels he was on, including The Writing Excuses live podcast, which was enjoyable. They had a few guests on the show – Lauren Beukes and Pat Rothfuss to name a couple – and it was fun getting to see Mary, Dan and Howard in person. What I love about Brandon is that as soon as he gets into a room for a panel he’s already up front asking “Does anyone have a question?”.  Even when I approached him after a panel to have him sign Way of Kings, he asked me if I had a question. As a matter of fact I did have one off the top of my head which was:  What character resonates with you most from any of the books you’ve written? Brandon’s answer:  “That’s a hard one. I guess I’d have to go with Dalinar.” This is a character that’s been with Brandon since he was fifteen.

Another thing that was exciting for me to learn at worldcon was that there were a couple panels geared towards actors. I attended one that focused on voiceovers for audiobooks and one called Creating a Memorable Video/Podcast.

Even with all of the panels I attended I still had time to take over Westoros: You will probably recognize the Iron Throne from HBO’s Game of Thrones.
You probably won’t as easily recognize that I’m dressed up as the character Yeine from A Hundred Thousand Kingdoms – a Hugo nominated book by N.K. Jemison.

All in all I had a great time, and I’m now an addict, which reminds me I need to sign up for Chicon7.